There were very few positives to take from Chelsea’s 1-0 defeat in the first leg of their Carabao Cup semi-final against Tottenham on Tuesday night.

The Blues dominated possession throughout and were camped in Spurs’ half for the majority, but failed to create anything of substance, though N’Golo Kante did hit the post.

Andreas Christensen had the best chance of the night for Chelsea, but failed to sort his feet out and blasted wide following Ross Barkley’s flick-on from a corner.

One positive, however, was to see Callum Hudson-Odoi start and his standout performance as one of the best players on the night before he was substituted.

The impact he had was limited before a ball had been kicked, though, due to Sarri’s choice to use Eden Hazard as a false nine rather than start Olivier Giroud as the central striker. 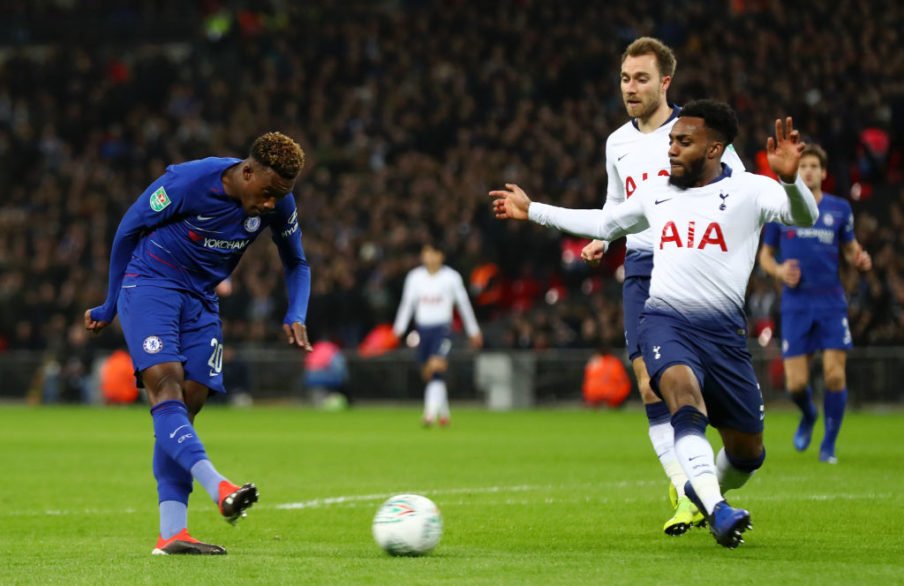 The 18-year-old delivered two sumptuous assists in Chelsea’s FA Cup victory over Nottingham Forest last weekend; using his skill and pace to beat his man on the wing and cross for Alvaro Morata, who was the central figure on that occasion.

With no target man in the box to aim at, Hudson-Odoi was limited to cutting in from the wing and having a shot or linking up the play with Hazard.

And while he is still effective in this role, cutting inside from the wing for him is used like how a fast bowler uses a different type of delivery to confuse a batsman. His main strength lies in beating defenders on the outside and crossing while cutting inside is used to keep defenders guessing at which way he will go.

That being said, Hudson-Odoi was still one of the best players on the pitch from both sides. The 18-year-old looked bright, sharp and fully justified why Bayern Munich are ready to splash £35 million on him.

Twitter: Can see why Bayern Munich are interested in Callum Hudson-Odoi. Another young English player with bags of talent.

From Chelsea’s point of view, they’ve got to keep him, both on the evidence of last night and how well he’s done whenever he’s been given a chance.

Willian looked out of sorts against Spurs before being subbed off for Pedro, who also had a minimal impact from the bench.

There seems to be no rhyme or reason as to why both should start over Hudson-Odoi, especially given how handing the youngster a run in the first team could influence him into signing a new contract with the club.

Though it may be a little too late for that. The winger’s head has been turned by Bayern, who have ageing wingers in Arjen Robben, who will leave at the end of the season, and Franck Ribery. Kingsley Coman has also seen his time in Munich limited by injury.

Given the emergence of Borussia Dortmund’s Jadon Sancho and Reiss Nelson, who is on loan at Hoffenheim from Arsenal, there’s no wonder Hudson-Odoi is more than tempted by a move to Germany.